"While waiting for the result, I realized this is how I will always feel during an HIV test, that I will always be a little scared. No matter what you do to protect yourself, there is always a risk you will be exposed to the virus during sex."

I was nervous, edgy, fidgety; the all-too-familiar dread was making me anxious as I waited for the results of my regular HIV test. Only, it hasn't been that regular of late. The last time I got myself tested was two years ago.

"My God, honey. Can you believe it?" I said to Vackie afterwards. "After all the countless random and not-so-random encounters, I'm negative!"

"I don't know," I said and sighed. "What's wrong with meeeeeeeeee?"

"OMG! I hate chuuuuuuu!" I protested while laughing. "Basta, the important thing is that I get myself tested."

While many of us are undoubtedly familiar with the joys of sex, some are still unaware of its peril. Sex is a double-edged sword. It can bite back. Ever since I found out some of my friends have HIV, I have become a strong advocate of safe sex and getting yourself tested.

While many nations are reporting lower new infection rates of HIV, the Philippines is among nine countries where we see increasing incidence rate of HIV infection among adults 15 to 49 years old, the Joint United Nations Programme on HIV/AIDS said in a report released last month.

Very few people get themselves tested, with the median proportion of men who have sex with men receiving an HIV test in the past 12 months at 38%.

To stop this, more people have started campaigns and awareness programs to educate the public. Niccolo Cosme, who has been active in the fight against HIV through social media, did a photoshoot a couple of weeks ago. He aspires to help spread awareness among the public through social networking sites like Twitter and Facebook. I joined him this year and apparently, after a lot of editing this is how I look like if I had perfect skin. 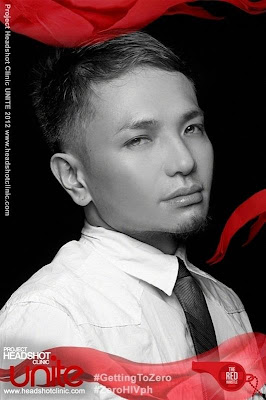 While having photo shoots is fun, it doesn't mean that our problem is serious. I'm asking you to get yourselves tested, and to encourage your friends to do the same. It sounds trite, but each small thing can lead to something greater.